While late July usually doesn’t give us many big hockey moments, the Chicago Blackhawks had a handful of historical events. They acquired one of the greatest goaltenders in league history, turned a former hated rival into a fan favorite, and announced a game for the ages. Let’s jump into our CHGO time machine and take a look back.

1930 – Earl “Dutch” Reibel was born in Kitchener, ON. He was the only player to lead the Detroit Red Wings in scoring not named Gordie Howe between 1950 and 1964. The Blackhawks acquired the center in 1957 with Billy Dea, Bill Dineen, and Lorne Ferguson for Bob Bailey, Hec Lalande, Jack McIntyre, and Nick Mickoski. The two-time Stanley Cup winner and Lady Bing Trophy winner played 40 games for the Blackhawks and put up four goals and 16 points. The Boston Bruins claimed Reibel in the 1958 NHL Intra-League Draft.

1952 – Defenseman Phil Russell was born in Edmonton, AB. The Blackhawks drafted him in the first round (13th overall) of the 1972 NHL Amateur Draft. He played the first 504 games of his 15-season career in Chicago, scoring 53 goals and 229 points. He was traded to the Atlanta Flames in 1979 with Ivan Boldirev and Darcy Rota for Greg Fox, Tom Lysiak, Harold Phillipoff, Pat Ribble, and Miles Zaharko. Russell also had stints with the New Jersey Devils and Buffalo Sabres before retiring in 1987.

1968 – Lyle Odelein was born in Quill Lake, SK. The Blackhawks acquired the veteran blueliner from the Columbus Blue Jackets in 2002 for a second-round draft pick and defenseman Jaroslav Spacek. He had seven goals and 13 points in 77 games before being shipped to the Dallas Stars in 2003 for a seventh-round pick and Sami Helenius. That pick was used to select forward Troy Brouwer. Odelein played 1,056 NHL games over 16 NHL seasons with eight different teams.

1998 – The Mighty Ducks of Anaheim named Craig Hartsburg their third head coach in franchise history, replacing Pierre Page. He had spent the previous three seasons as head coach of the Blackhawks and went 104-102-40. After making the Stanley Cup playoffs in his first season, Hartsburg was fired 33 games into the 2000-01 season.

1944 – Gerry Desjardins was born in Sudbury, ON. The Blackhawks acquired the goaltender from the Los Angeles Kings in 1970 with Bryan Campbell (not that one) and Bill White for Denis DeJordy, Gilles Marotte, and Jim Stanfield. He appeared in 32 games over three seasons in Chicago, going 17-8-5 with a .916 save percentage (SV%) and 2.58 goals-against average (GAA).

Desjardins’ time with the Blackhawks was interrupted for a few weeks. On Sept. 9, 1971, he was traded to the California Golden Seals with Kerry Bond and Gerry Pinder for goalie Gary Smith. He returned to the Blackhawks on Oct. 18, 1971, for Gilles Meloche and Paul Shmyr. He was drafted by the New York Islanders in the 1972 NHL Expansion Draft. His career ended in 1977 when he was hit in the eye with a puck, which led many NHL goalies to switch from fiberglass masks to the cage and helmet style we are used to seeing these days.

1952 – The Blackhawks purchased the contract of Red Wings’ star Sid Abel. After scoring 183 goals and 463 points in 570 games in Detroit, the future Hall of Famer played in just 42 games over the next two seasons, where he served as head coach while jumping over the boards. He was the last full-time player/coach in NHL history. He coached the Blackhawks through the end of the 1953-54 season before returning to the Motor City in 1957.

1966 – Mike McNeill was born in Winona, MN. The Blackhawks signed the right wing in 1989. He had two goals and four points in 23 games during the 1990-91 season before he was traded with Ryan McGill to the Quebec Nordiques for Paul Gillis and Dan Vincelette.

2008 – Blackhawks were joined by their oldest rivals, the Red Wings, at Wrigley Field to make a joint announcement with the Chicago Cubs and NHL. The parties revealed that the 2009 Winter Classic would be played at the historic baseball stadium on Jan. 1, 2009. This was the second Winter Classic and third outdoor game in league history.

1903 – Johnny Sheppard was born in Montreal, QC. The left wing played the final 41 games of his NHL career with the Blackhawks in 1933-34, scoring three goals and seven points. He capped off his eight-season career by helping the Blackhawks win their first Stanley Cup in franchise history.

1957 – The Blackhawks acquired a pair of future Hall of Famers from the Red Wings in Ted Lindsay and Glenn Hall, in exchange for forwards Forbes Kennedy and Johnny Wilson, defenseman Bill Preston, and goaltender Hank Bassen. Lindsay scored 29 goals and 84 points in his two seasons with the Blackhawks. He retired in 1960 but returned to Detroit for the 1964-65 season. Hall became one of the best netminders in league history over the next decade, earning the nickname “Mr. Goalie.” He started every single game during his first five seasons in Chicago. He went 276-229-107 with a .916 SV%, 2.60 GAA, and 51 shutouts.

1973 – Dennis Bonvie was born in Antigonish, NS. The Blackhawks claimed the right wing off waivers from the Edmonton Oilers in 1998. He had no points in his 11 games before he was traded to the Philadelphia Flyers for winger Frank Bialowas, who never played for the team.

1977 – Shawn Thornton was born in Oshawa, ON. The Blackhawks acquired the rugged right wing in 2001 from the Toronto Maple Leafs for Marty Wilford. He appeared in 31 games over the next three seasons, scoring just two goals and three points. He signed with the Anaheim Ducks in 2006, where he won the first of his two Stanley Cups. He won the other with the Bruins in 2011.

1933 – Defenseman Gord Hollingworth was born in Montreal, QC. He had three goals and 12 points during the 1954-55 season after he was acquired from the Montreal Canadiens for cash. In 1955, he was traded to the Red Wings with Dave Creighton, John McCormack, and Jerry Toppazzini for Tony Leswick, Glen Skov, Johnny Wilson, and Benny Woit.

1966 – David Mackey was born in Richmond, BC. The left wing was an 11th-round pick (224th overall) in the 1984 NHL Entry Draft. Over two seasons, he had two goals and seven points in 46 games for the Blackhawks. His time in Chicago ended in 1989 when the Minnesota North Stars claimed him off waivers. Mackey finished his pro career with the Chicago Wolves, playing 45 games in the 1999-2000 season.

1991 – Goaltender Robin Lehner was born in Gothenburg, Sweden. He signed with the Blackhawks in 2019. After going 16-10-5 with a .918 SV% and 3.01 GAA, he was traded to the Vegas Golden Knights for a second-round pick, defenseman Stanislav Demin and Malcolm Subban. That draft pick was used to select top goaltending prospect Drew Commesso.

1992 – Tanner Kero was born in Hancock, MI. The Blackhawks signed the forward out of Michigan Tech. he scored eight goals and 22 points in 72 games over three seasons. He was traded to the Vancouver Canucks in 2018 for Michael Chaput. Kero had 40 goals and 84 points in 130 AHL games with the Rockford IceHogs.

1929 – Eddie Mazur was born in Winnipeg, MB. In a move that was considered a loan, he was traded to the Blackhawks in 1956 by the Canadiens for cash. He had one assist in his 15 games before being returned to Montreal.

1997 – The Blackhawks traded forward Murray Craven to the San Jose Sharks for winger Petri Varis and a sixth-round draft pick. Varis only played one game in Chicago. The draft pick was used on Jari Viuhkola, who never played in the NHL.

1914 – George Allen was born in Bayfield, NB. He played both defense and left wing during his eight-year career. He was traded to Chicago in 1939 by the New York Rangers for cash. He became a mainstay in the Blackhawks’ lineup for the next six seasons, scoring 69 goals and 164 points in 272 games. In 1946, he was dealt to the Canadiens for Paul Biebault.

1955 – Defenseman Bob Hoffmeyer was born in Dodsland, SK. The Blackhawks drafted him in the fifth round (79th overall) of the 1975 NHL Amateur Draft. He had three assists in just 11 games over two seasons before signing with the Flyers in 1981.

1986 – Andrew Desjardins was born in Lively, ON. The Blackhawks acquired the center from the Sharks at the 2015 trade deadline for a seventh-round pick and Ben Smith. He had eight goals and 16 points in 136 games over three seasons. Desjardins dressed in 21 of the 23 games of the 2015 playoff run that ended with a Stanley Cup presentation on United Center ice.

1988 – Frank Zamboni died at the age of 87. He, of course, invented the ice resurfacing machine used in ice rinks across the globe. He created his iconic vehicle in 1949. The Zamboni shaves off the ice surface, collects the shavings, washes the ice, and puts down a fresh coat of water onto the rink. It made a once time-consuming task that needed to be done by a team of individuals to get accomplished by one person in about 15 minutes. The Bruins were the first NHL team to incorporate Zamboni’s machine in 1954. 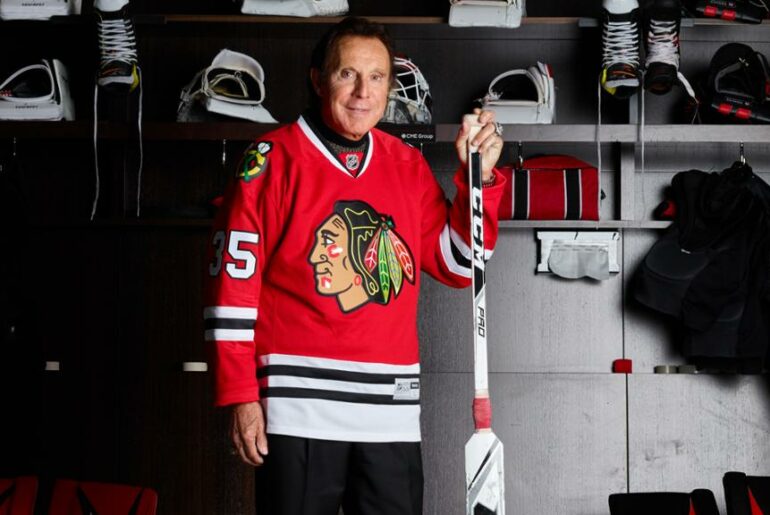