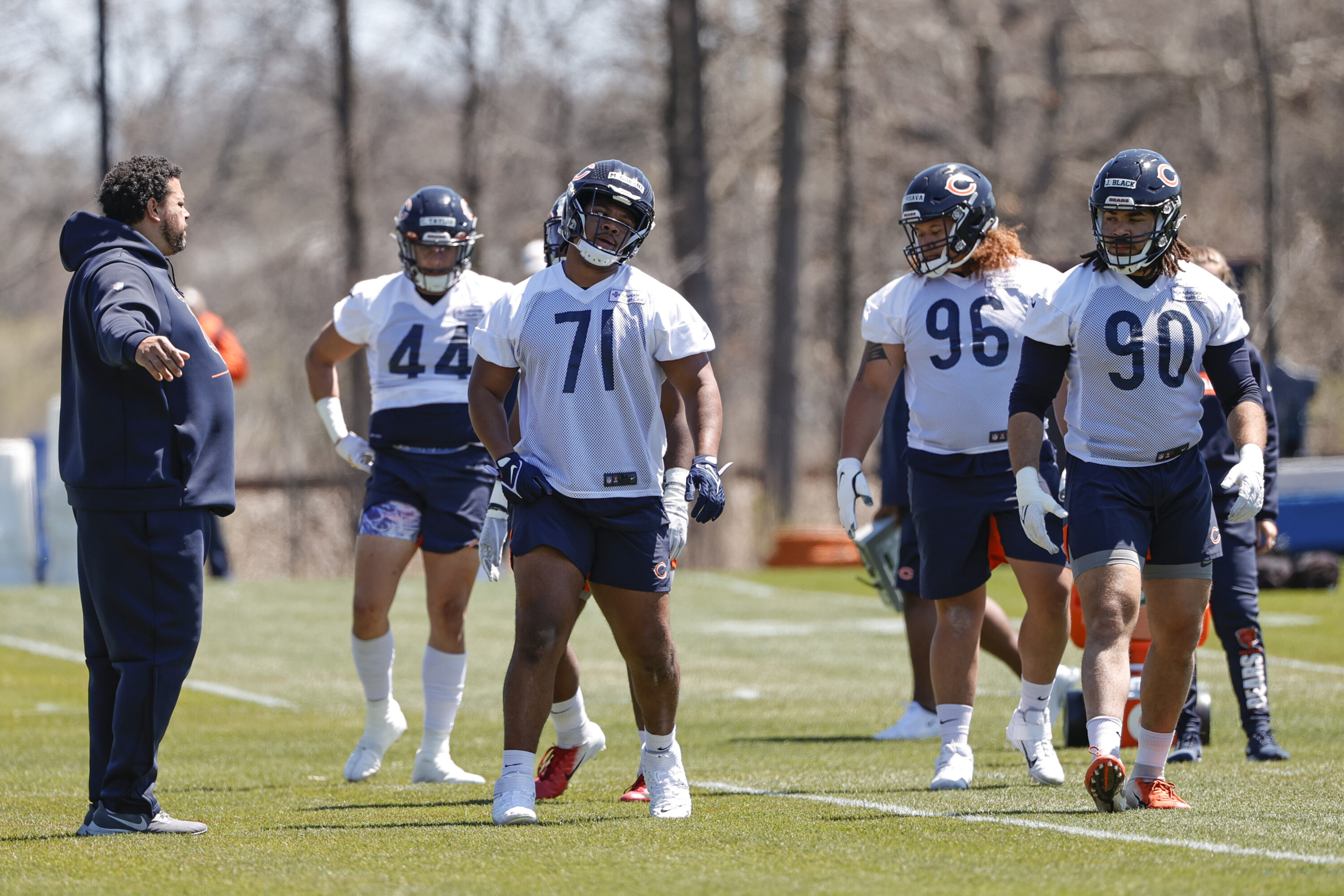 Four things to watch as the Chicago Bears begin OTAs

This post is unlocked for everyone! But to read all of our Bears written coverage, become a CHGO Family member today! Members get access to all of our premium written content for each Chicago team and annual members get their choice of a free t-shirt!

The Bears have held voluntary minicamp and rookie minicamp so far this offseason.

There are nine OTA practices scheduled at Halas Hall in the coming weeks with the first one beginning on Monday, May 16. Veteran minicamp will be held from June 14-16.

Here are four topics to follow during the voluntary OTAs.

1. The offense and how it begins to take shape

There is a good chance Luke Getsy’s offense will remain practically unknown until the first regular-season game is played. Even then, Week 1 against the 49ers at Soldier Field will only showcase what the Bears offensive coordinator and his staff could install up to that point. Maybe half way through 2022 will be a better benchmark to get a clearer picture of the offense.

However, the foundational elements of the offense will begin taking shape in OTAs. How does second-year quarterback Justin Fields look in a new offense that features plenty of new pass catchers? Fields has experience with Darnell Mooney and Cole Kmet, but it will be interesting to see how often he targets Bryon Pringle, Equanimeous St. Brown, Velus Jones Jr.  and veteran receivers Tajae Sharpe and Dante Pettis. Of course, that will also be predicated by Getsy and Fields’ progressions on a given play.

How often players are utilized in the offense and where they line up will also be something worth watching. Brown didn’t get much playing time in Green Bay, so what does Getsy envision for him in Chicago? Jones is a rookie and will also have special teams responsibilities. How does that factor into things?

For the running back room, David Montgomery is the unquestioned starter and one of the leaders on the team. But how does Getsy incorporate second-year running back Khalil Herbert into this offense? He wasn’t used nearly enough last season and should see an uptick in usage in 2022. Also, are the Bears actually going to use a fullback? Khari Blasingame is on the roster and having a lead block for the running backs would be a different wrinkle for the offense.

There are plenty of questions surrounding the offense, but maybe OTAs can provide some answers.

Shockingly sticking with the offense here, but the offensive line has its own set of questions that need some answering. To begin, Sam Mustipher got the first reps at right guard in voluntary minicamp. Who, though, is the realistic option to start at the position come Week 1?

At this point, heading into OTAs, is the Week 1 starting right guard even on the roster?

At the tackle positions there is slightly more clarity. During voluntary minicamp, former second-round draft pick Teven Jenkins was slotted as the right tackle – the position he played at Oklahoma State – after playing his rookie season at left tackle.

Larry Borom, who was a fifth-round pick in 2021, lined up at left tackle during the voluntary minicamp. According to Dane Brugler’s 2021 Beast from The Athletic, Borom only played one game at left tackle at Missouri. There isn’t a guarantee the switch works out.

Maybe fifth-round draft pick Braxton Jones could be in the mix at the position. He played left tackle at Southern Utah and lined up at the same position during rookie minicamp.

Bears general manager Ryan Poles’ first two picks were introduced to the NFL in rookie minicamp, but now Gordon and Brisker will get their opportunity to go against better competition when they go against the rest of their teammates.

Some of the matchups worth watching will be when Gordon lines up in man-to-man coverage on Mooney and Pringle. Whether that is in 7-on-7s or in team drills, seeing how the No. 39 overall pick stacks up against the two will show his readiness against the top two receivers on the team.

Brisker will get his reps against the Bears’ wide receivers, but he will most likely see the tight ends. So Brisker against Cole Kmet will be the primary matchup during OTAs.

Not only will Gordon and Brisker be competing against the offense but also players at their respective positions. Coach Matt Eberflus has said the second-round draft picks would have to compete to become the starters, so monitoring how the rookies fare in drills and in each rep compared to some of the veterans will also be important to watch.

4. The defensive line and the rotations

At this point, everyone knows how important the 3-tech is in this Bears defense. Free-agent signing Justin Jones is the all-important player currently filling that position for defensive coordinator Alan Williams. Although he wasn’t the Bears first option, he is still just 25 years old and someone the Bears clearly like. Jones signed a two-year, $12 million contract.

Right now, Jones’ backup will most likely be Angelo Blackson – who had a decent season for the Bears in 2021. The eight-year veteran finished with 43 total tackles, 2.5 sacks, 2 passes defensed and one interception.

Despite the Bears not signing Larry Ogunjobi, the 3-tech position isn’t in a terrible spot. There are questions, though, about the other defensive tackle position. Is former seventh-round pick Khyiris Tonga the starter? Maybe Mario Edwards Jr. can play at the position, even though he is more suitable to play as a defensive end and not a nose tackle.

The main point being here is that it will be interesting to see who the Bears start at that position and to see what the defensive line rotations look like.

• Will and Nick’s roundtable: Breaking down the 2022 schedule
• Adam Hoge’s Bears Things: A look at all three phases
• Top 3 takeaways from rookie minicamp